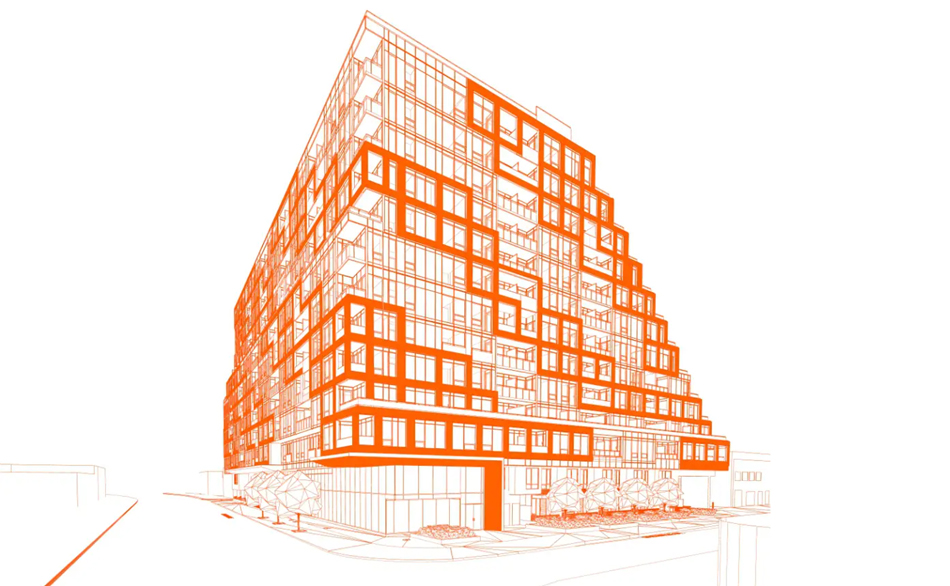 Introducing 28 Eastern condos – a new mid-rise condo in Corktown by Alterra Developments that is expected to launch soon.

At present, few details have been released about 28 Eastern condos but the development application gives an indication of what we can expect. there will be a total of 379 units in a 12-storey condo tower, along with 16 townhomes that will be located on the ground level of the development. According to the planning application, the condo tower units will range in size from 290 to 1,000 sq. ft. and the available layouts will be studio, one-bedroom, one-bedroom plus den, two-bedroom, two-bedroom plus den and three-bedroom. In addition to the residential units, 28 Eastern condos will contain 10,545 square feet of commercial space fronting onto Eastern Avenue.

28 Eastern condos will have over 16,000 square feet of amenities for the benefit of residents, with half of it indoors and the reminder outdoors. There are few details so far about the types of amenities on offer, but much of the outdoor amenities will be located on outdoor terraces and these will include dining areas and barbecues. For more details on the development and to receive updates such as floorplans and prices when they are released, register with us today.

28 Eastern condos is located in the Corktown neighbourhood to the east of downtown Toronto. It is close to Lake Ontario and the soon-to-be-developed Quayside and Portlands area, meaning there is great potential for future price growth. In terms of transit, the TTC streetcar service on King Street is just steps away form the entrance to 28 Eastern condos and can quickly transport passengers towards the downtown core and nearby subway connections. The development is also conveniently located for anyone with a car, since Toronto’s two main highways – the DVP and the Gardiner Expressway – are both just a few minutes’ drive away.