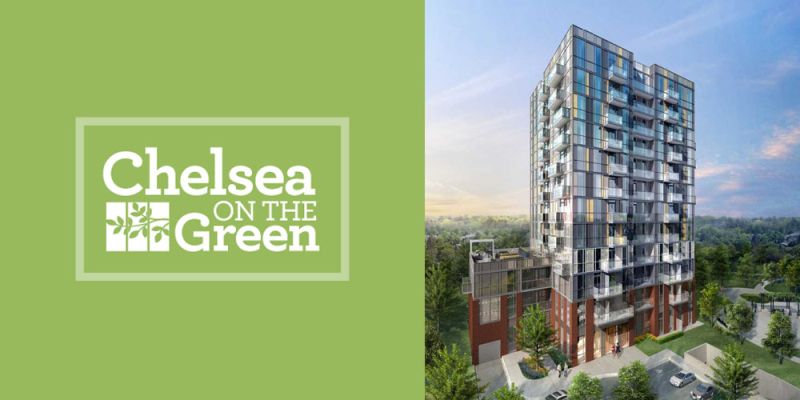 Introducing Chelsea on the Green by Lormel Homes – a beautiful new mid-rise condo tower coming to the eastern edge of Mississauga.

The first of two towers to be built, Chelsea on the Green will offer 12 storeys with a total of 153 units, ranging in size from 524 square feet to 749 square feet. The tastefully designed building offers a number of amenities to residents, including a 24-hour concierge, fitness centre, yoga and pilates studio, guest suites, dog-wash room, party room, meeting areas, and more.

Chelsea on the Green is located in Rockwood Village – a charming neighbourhood in Mississauga that borders the city limit of Toronto. As you would expect in a well-equipped city like Mississauga, there is no shortage of options for shopping, dining and other entertainment options, with some large malls and many well-known names all within easy reach. For families with kids, the education is good in the area and Chelsea on the Green is in the catchment area for Glenforest Secondary School, which is ranked in the top 100 in all of Ontario.

For recreation, Centennial Park is within walking distance and offers several acres of greenery, a creek to walk alongside, a large pond, and many sporting facilities including a golf course, go-kart track, baseball fields, soccer pitches, cricket pitches, Centennial Stadium, a swimming centre, and a ski area in the winter.

Chelsea on the Green’s fantastic location next to the border with Toronto gives great access to much of the GTA. Highways 401, 403 and 427 are all less than 10 minutes drive away, while Dixie GO train station is also within easy reach. For transport to Mississauga, there is a stop on the Mississauga Transitway just a few minutes away from the site, and from there you can catch on rapid transit bus straight to the city centre on a bus-only road. Meanwhile, if you’re heading a little further afield, Pearson Airport is just a short drive to the north and can be reached in 15 minutes if traffic is ok.