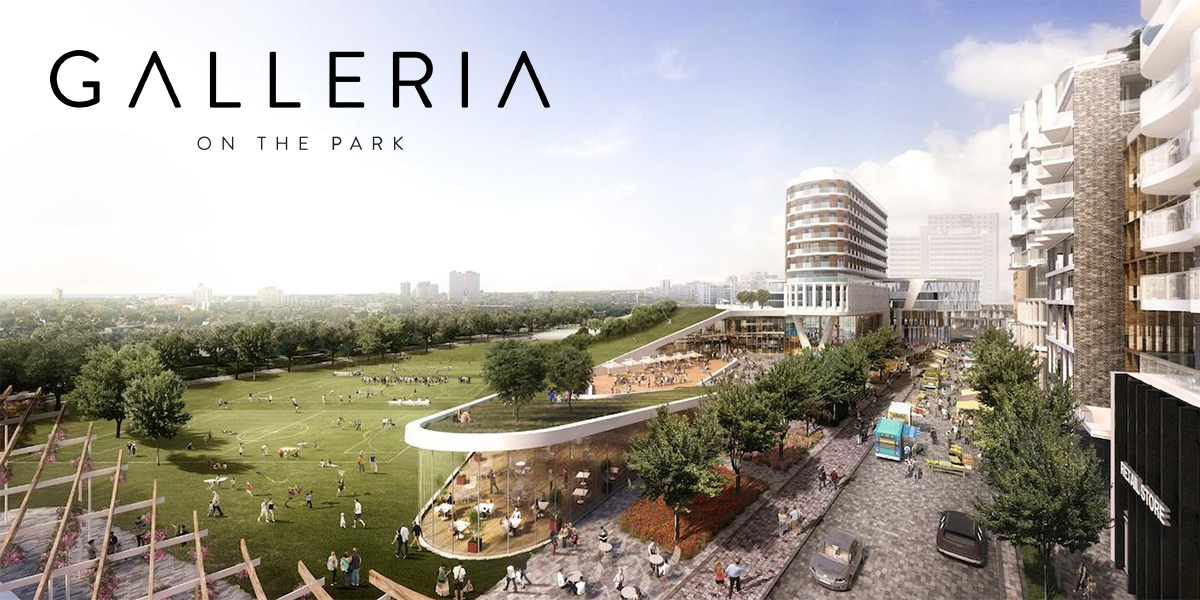 Introducing Galleria on the Park – an exciting, master-planned urban community on the site of the Galleria shopping centre in the west of Toronto.

Galleria on the Park Development Details

Galleria on the Park is set to be one of the biggest developments that Toronto has ever seen. It will include eight mixed-use towers, an enlarged Wallace Emerson park, a new community centre, and vast amounts of retail and office space.

The buildings will come in a wide variety of shapes and sizes. According to planning applications submitted to the city of Toronto, buildings one and two will stand by themselves and will be 18 and 29 storeys respectively. Buildings 3A and 3B will be connected by a podium level and will be 35 and 25 storeys tall. Buildings 4A and 4B and buildings 5A and 5B will also stand in pairs connected by podium levels and will reach heights of 32, 23, 26 and 21 storeys. Each of these buildings has dedicated retail space on the lower levels, while buildings 4A/4B and 5A/5B also include office space.

Wallace Emerson Park, which currently sits on the lot, will be expanded from 6.58 acres to 7.81 acres and include exciting new features like a dedicated skating path for the winter. Many of the new buildings will overlook this green space, giving Galleria on the Park its name and offering a touch of nature ion the city. The final feature is the new community centre that will be built on the west side of the lot, replacing the current community centre and doubling its size to 95,000 square feet.

Galleria on the Park is located in the Wallace Emerson neighbourhood, which includes Bloordale Village at its southern end and neighbours the Junction Triangle to the west. It is an increasingly popular and in-demand part of Toronto, with many independent business – shops, cafes, restaurants, micro-breweries – and young residents moving to the area.

The convenient location puts many popular sites within easy reach. High Park is just a short distance away, while the downtown core is an easy commute. Meanwhile, the many amenities on offer in such a well-established neighbourhood help Galleria on the Park receive a walk score of 91/100, indicating that most day-to-day activities can be accomplished on foot.

The transit connections are very good at Galleria on the Park, which is highlighted by the 84/100 transit score. There are TTC bus stops just steps away from the development and these can quickly connect travelers to more rapid transit. A short way to the north is St. Clair Avenue with its streetcar on a dedicated right of way. To the south is the Bloor-Danforth line of the subway, which connects to the rest of the subway system and can help you to get to downtown in relatively short time. With such options available, the location is ideal for anyone commuting to downtown, midtown, Etobicoke, or even farther away.