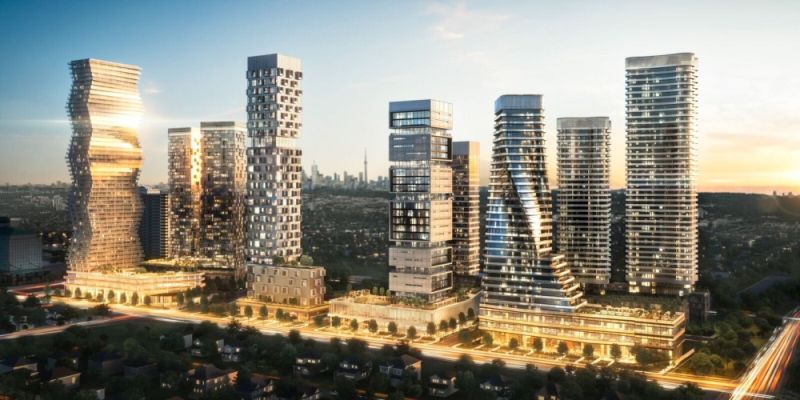 Kicking off a long-term vision to build 10 condo towers between Confederation Parkway and Grand Park Drive, the developers of M City – one of the most ambitious communities in Mississauga’s history – have finally released details* on their highly-anticipated first release of suites.

Rising up a majestic 51 storeys from street level, M City’s first tower will offer buyers a selection of 1BR and 2BR condo suites, ranging in interior space from 546 to 861 square feet. Regardless of the number of bedrooms, the first phase offers buyers a choice between suites outfitted with a media space (large enough for a desk) or a larger “flex” space designed for multiple uses.

Each suite at M City comes with its own balcony, which will range in size from 113 to 251 square feet – in some cases, featuring a “wraparound” style for optimal city views.

One of the most exciting aspects of M City’s first tower is its expansive, all-season outdoor amenity terrace, complete with an outdoor pool.

M City residents will also be just steps away from all the neighbourhood amenities that Mississauga’s City Centre has to offer – a list that includes the Square One Shopping Centre, Celebration Square, Living Arts Centre, and Sheridan College’s Hazel McCallion Campus.

Residents will enjoy easy access to the Hurontario LRT (estimated for 2022 completion) via the nearby proposed Duke of York station, as well as to GO Transit via the stop at Square One. For those who prefer to commute by car, Highway 403 is just a short distance to the north, accessible via Hurontario Road.