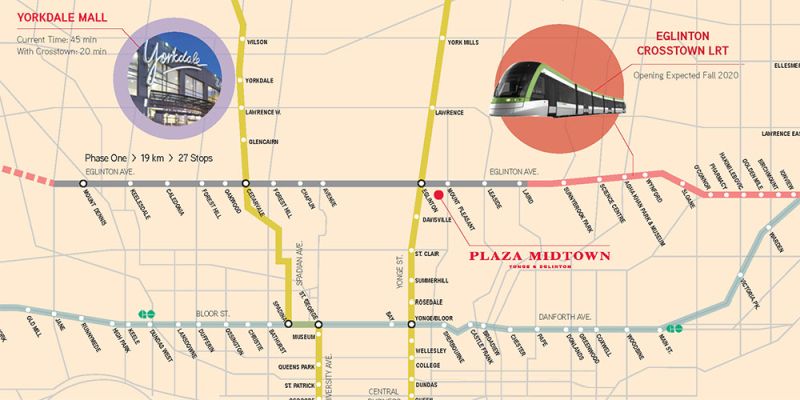 Located just steps from the epicentre of Toronto’s bustling Yonge and Eglinton neighbourhood – voted Toronto’s best by Toronto Life in 2015 – Plaza Midtown combines the best of urban living, with the quality touches that buyers have come to expect from the development team at Plaza.

In addition to 1BR + Den suites starting at approximately $420,000, Plaza will also offer 2BR and 3BR layouts to choose from when it is officially launched. Residents will also have access to a modern and practical selection of amenities, including:

What will certainly make the community a quick seller, however, is its prime location – just steps away from access to not only the TTC’s Yonge subway line, but also the Eglinton Crosstown LRT (scheduled for completion in 2021).

With an average household income of $87,000, and a population that grew by 17 per cent from 2009 to 2014, the Yonge and Eglinton area has become just as attractive for investors, as it is for the many young professionals who choose to call it home.

With an impressive Walk Score of 98, Plaza Midtown offers residents easy walking access to Loblaws, Goodlife, Shoppers Drug Mart, Sobeys, and a wealth of retail and dining options. For those who prefer to drive, parking spaces will be available (at an additional cost) for purchasers of 1BR+Den layouts and larger.