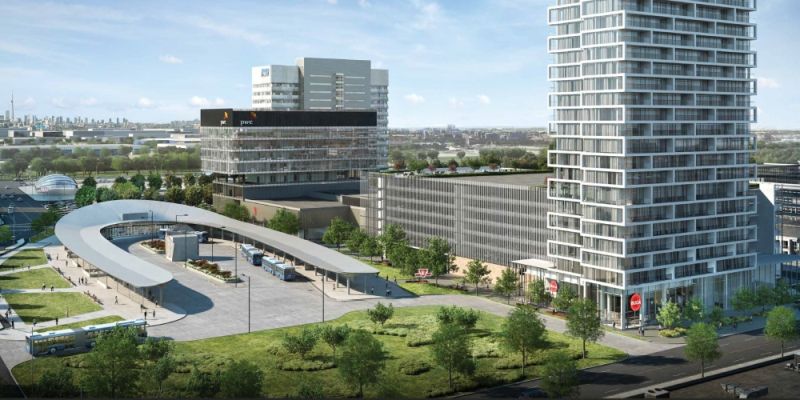 Transit City will be next door to a Viva bus terminal, which will be connected by a tunnel to the new Vaughan Metropolitan Centre subway station, the northernmost stop of the new Toronto-York Spadina Subway Extension set to open in 2017.

We could list all the places that will be within easy reach of Transit City, but there are too many to mention. Instead, let’s just take a look at the new TTC map to understand how amazingly connected this building will be:

Currently in the pre-construction phase, the 55-storey condo tower will redefine condo living, in addition to being one of the most connected buildings in the entire GTA.  In the words of Don Schmitt, principal from Diamond Schmitt Architects, it is “the first transit-friendly, pedestrian-oriented, urban community in the 905 district”.

Transit City Condos phase one will boast 553 suites, which the developer says will be bigger than average condo sizes in Toronto. In addition to more square footage, each suite will have a balcony and floor-to-ceiling windows, giving the feeling of even more space.

The lobby is set to have the elegance of a luxury hotel and will be complemented by the first Buca restaurant outside of Toronto. The high-end eatery will be 4,500 square feet and will serve top quality Italian food to residents in the finest of surroundings.

In another innovative move, Transit City won’t have its own gym. Instead, residents will have access to a brand-new, custom-built, 100,000 sq ft YMCA facility, which will be just steps away and part of SmartCentres Place.

The building will also be next to a new 9-acre park that will be the focal point of SmartCentres Place. The emphasis on creating wide-open green spaces show the intentions of the developers to create a genuine community for people to live, work and play in. In addition to the park, plans for SmartCentres place include shopping, office towers, a library, a community centre, and other entertainment options. It will truly be a community of the future.