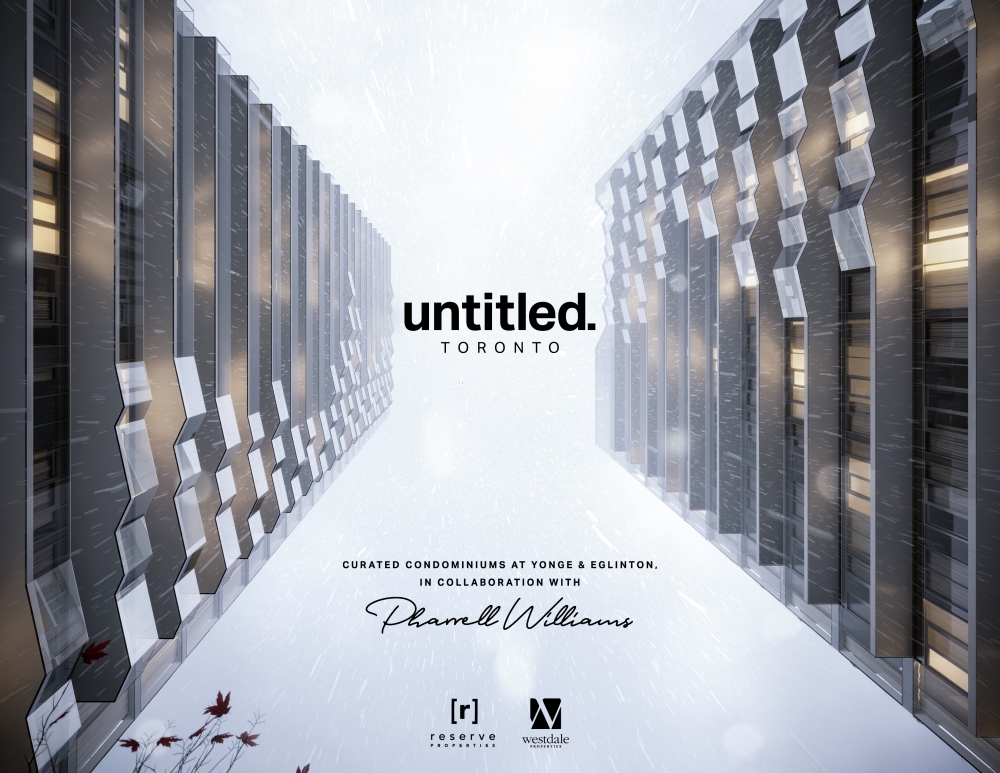 Untitled Toronto will consist of two high-rise towers connected by a 4 to 8-storey podium. The south tower will face onto Broadway Avenue and be the taller of the two towers at 33 storeys. The north tower will stand behind it and rise to 21 storeys. The towers will have a wide variety of layouts, ranging from studio apartments to 3-bedroom, family-sized units. All units will include a balcony, and some will have a den that will be optimised to fit a pull-out couch.

Residents of Untitled Toronto will be able to make use of 34,000 square feet of indoor and outdoor amenities, that will include, among other things: an indoor/outdoor swimming pool, a spa, a gym, a basketball court, a rooftop terrace with BBQs and pizza ovens, and a co-working space.

The project is being developed by Reserve Properties and Westdale Properties in collaboration with Pharrell Williams. The two developers are also working together on Line 5 condos, another successful midtown development that was launched recently. Westdale Properties has also been involved in other recent high-profile Toronto projects like Nobu Residences.

Untitled Toronto is located in the Sherwood Park neighbourhood, just a short walk from Yonge and Eglinton – one of the busiest and most vibrant intersections in Toronto. The location boasts an impressive walk score of 88/100, indicating that the majority of day-to-day tasks can be carried out on foot. It’s clear to see why because there is an abundance of local amenities, including many shops, cafes, restaurants, local businesses and services, a Cineplex theatre, and the Yonge-Eglinton Centre- a small mall on the north-west corner of the junction that gives the centre its name. in addition to the amenities in the immediate vicinity, Untitled Toronto is close to other popular neighbourhoods like Davisville and Leaside – just another reason why this is such a popular midtown location.

In terms of public transport, Untitled Toronto has an excellent transit score of 87/100 thanks to its close proximity to the subway line. Eglinton subway station is just a nine-minute walk away and is on line 1 of the TTC’s subway network, which means it offers services south to downtown Toronto and north to North York. By the time that Untitled Toronto is completed, the Eglinton Crosstown LRT should also be in service, with the planned Mount Pleasant station just a six-minute walk away from Untitled Toronto.

The Grammy Award-winning artist, producer, songwriter, philanthropist, designer and entrepreneur is known for high-profile collaborations, including a capsule collection with Chanel and a long-standing relationship with Adidas and Human Made. Other collaborative projects include an upcoming Youth Centre in Virginia Beach with Oppenheim Architecture + Design, work with Zaha Hadid Architects and the creation of the Something in the Water Festival. The collaboration with Reserve and Westdale marks Pharrell’s first foray into multi-residential development.